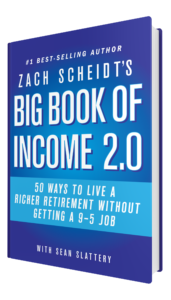 A few years ago, I wrote a tell-all book revealing a rare collection of secrets that anyone can use to generate income . . . and in some cases, a LOT more income. That book was titled Big Book of Income and it really struck a nerve with folks, to say the least . . .

To give you some perspective, a “bestselling” book usually sells tens of thousands of copies. However, to keep up with demand, my publisher had to print over 300,000 copies of Big Book of Income!

But since then, the world of income generation has changed—and changed quickly:

There’s a new president in the Oval Office, changing laws for retirement accounts, taxes and investing. There’s new internet technology spreading rapidly—changing how money is made and saved. Not to mention corporate America is flush with cash—enabling companies to spend more money “bribing” folks like you for your attention and opportunities. All of which means there are more ways for you to collect income quickly and dependably than ever before!

So to stay ahead of the curve, my research team and I put our other projects on the back burner, rolled up our sleeves and hunted down the most legitimate, practical, income-generating ideas working right now in today’s economy.

I felt this project was absolutely vital considering the state of American retirement. The all-but-guaranteed retirement of previous generations is now part of a bygone era. The Bureau of Labor Statistics even grimly predicted the future, stating “Traditional retirements will be the exception rather than the rule.” And the proof is simply overwhelming . . .

Pensions for nongovernment workers have virtually become a historical relic. For folks even lucky enough to collect a pension at all, the median private pension is only $9,376 a year ($781 per month). Adding insult to injury, most employees are pushed into self-managing 401(k) plans—forcing retirees to become their own financial planners, tasking them with picking their own stock market winners and creating their own financial crystal ball.

Then there’s Social Security. While other countries like Canada invested their citizens’ entitlement dollars into world-class, growth-booming assets, U.S. politicians felt entitled to use the American Social Security coffer as their personal pork-barrel piggy bank. The predictable result is absolute disaster. Within this decade, Social Security will reach a new point of no return—owing $1 trillion in benefits for the first time in U.S. history. Can Uncle Sam make good on his promise to American citizens? Only time will tell . . .

And lastly, there’s the sad state of private savings. According to one recent survey, the median retirement account for investors age 65 is zero dollars. That means, half of those folks have more than nothing and the other half have less than nothing.

But despite the bleak outlook, there’s light at the end of these chapters. Here’s what I mean . . .

One big retirement myth is that you need an enormous nest egg to pave the way for your golden years. This is factually incorrect. A savings account will deplete over time. But the same nest egg invested in powerful income-generating assets will replenish your wealth and take your net worth to the next level. If you want to retire well, you don’t need a massive retirement account. You simply need income.

This book is a continuation of my original and much-loved work in Big Book of Income. And just like its predecessor, Big Book of Income 2.0 was uniquely written to pay for itself in spades with income-generating ideas propelling you into the retirement life you deserve.

More than 100,000 people know this is true. I’m 100% certain because they read my insights every single month in my advisory Lifetime Income Report.

Unfortunately, there will be no knight in shining armor coming to save us from the retirement crisis. The responsibility is now on each and every American to save the day for themselves. And the powerful ideas in this book can help you do just that.

The dawn of a new retirement day lies ahead. And it all begins with the ideas buried between these pages.