Between the coronavirus, economic turmoil, widespread civil unrest, toxic historical revisionism, a radical shift toward socialism, the most contentious election cycle in memory, and a sudden vacancy on the Supreme Court at the most consequential and dramatic moment possible…

It’s a hell of a time to be a commentator on the American condition.

But fall is upon us. And when the breezes turn cooler and the leaves begin to change colors, it’s been my tradition to take a break from the news — however urgent, extreme, or surreal — to discuss something that’s very close to my heart.

Of course, I’m talking about hunting. The twist is that this particular autumn, the pursuit of wild game is suddenly much more relevant to American life, on a number of levels. And I want to highlight this fact, so we don’t forget how important hunting is to our culture, and our future…

Because that’s a very real danger in the modern U.S. of A., if we let it happen.

In my article series from last fall, I revealed how hunting participation in the U.S. peaked back in 1982 — and has declined over 50% since then, relative to the population. That’s a very distressing trend, both from a standpoint of the sport’s long-term survival, but also from a conservation funding standpoint.

A lot of people don’t realize this, but excise taxes on firearms, ammo, and other outdoor gear pay for the acquisition, upkeep, and improvement of much of this nation’s public land. That means when hunting suffers, so does hiking, mountain-biking, rock-climbing, bird-watching, and virtually every other public-land activity.

This year, however, America seems to be seeing an increase in hunting interest and participation — the most substantial one in many years. Pennsylvania, a perennial top three hunting state, is reporting a nearly 5% uptick in license sales. Indiana, Georgia, Vermont, Virginia, Minnesota, New Mexico, Iowa, and many other states are seeing higher sales of licenses and permits, too.

All in all, 2020 looks to be a banner year for hunting. It’s not hard to understand why. The coronavirus crisis has put a strong focus on meat supplies, social distancing, and safer outdoor, open-air recreation. Hunting checks all three of these boxes. And with all the social unrest adding to the contagion problem in a lot of America’s cities, we’re now seeing a mass migration of people from metro to rural areas — where hunting is still a big part of normal American life.

My hope is that a lot of these urban and suburban transplants will take up hunting and fishing, now that they live in closer proximity to places where they can practice these pursuits more easily. And now that they live among people who include these activities as part of their daily lives.

In my “perfect world” scenario, I see a future America in which the population is not so highly concentrated in major metropolitan areas anymore, but spread out to re-populate and revitalize thousands of stagnating small towns across the fruited plain. The catalyst of this diffusion will be technological — namely, access to reliable high-speed Internet and the rise of the “virtual office.”

And in this dream scenario, I believe (hope) we’ll see a sustained uptrend in hunting via a massive infusion of younger, more diverse blood into a pursuit that’s currently aging to death. But we’ll see how all that shakes out…

In the meantime, let me show you a big reason why we’re going to need a lot more hunters roaming the woods and fields of our hinterlands. In fact, we could use an army of them right now, quite literally.

Back in January of this year, I spied a dead animal on the side of the road, less than 200 yards away from the entrance to my driveway. But that was not unusual. On the country roads of northern Maryland, it’s pretty common to see road-killed foxes, deer, raccoons, opossums, and other critters (coyotes too, occasionally).

But even at a fast glance in motion, this one looked different. The body was front-heavy — and all black, with white feet. So I backed up my truck to get a better look, and was shocked to see this fella pictured right here… 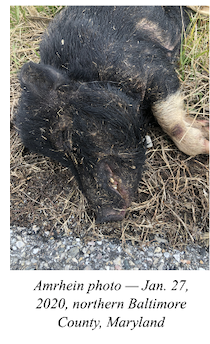 Yep, it’s a pig. One with the large, sloping head, tusks, and long wiry hair that strongly suggest Eurasian wild boar genetics. Pigs like these are rampant in many areas of the U.S., and are sometimes called “razorbacks” or “Russian boars.”

But they’re not supposed to exist in Maryland, at least not in breeding populations. In all my years afield in the Old Line State, I’d certainly never seen one before. Yet there one lay, dead as disco, a five-iron away from my house.

Now of course, it’s entirely possible that this particular guy was an escaped farm animal with unusually “wild-ish” genetic traits. It’s also possible that he was a novelty pet someone released when it got too big and expensive to feed.

But it’s also more than plausible that this boar was an unlucky representative of a larger migration spreading into Maryland from Pennsylvania or Virginia — both of which have sustained breeding populations of wild pigs.

Now of course, feral hogs have existed in America for centuries. The Spanish imported and released pigs to run wild on these shores starting back in the early 1500s. And starting in the 1890s, wild boars imported from Germany and other places were released into fenced enclosures in New Hampshire, New York, North Carolina, California, Texas, and more.

Inevitably, a number of these pigs escaped and began inter-breeding with existing populations of feral hogs. And speaking of breeding, sows can reach sexual maturity in as little as three months, and can squirt out a litter of up to 12 piglets twice a year.

That’s why today, there are as many as nine million wild pigs roaming at least 39 of the 50 states. In the last 20 years, this population has exploded. Officials from the U.S. Department of Agriculture call it the “swine bomb.”

Feral hogs can be aggressive, too. Last fall, in fact, a Texas woman was attacked and killed by a group of them in a residential area 40 miles outside of Houston. Currently, feral hog damage costs the U.S. agricultural industry $2.5 billion annually. They’re also horribly destructive to wetlands and other environmentally sensitive areas.

To merely maintain America’s current wild pig population — much less reduce it to a manageable level — up to 75% of them have to be killed off every year. That’s 6.75 million hogs a year. A lot of bacon, for sure.

Needless to say, hunters are the first line of defense against this invasion. But to make a dent, we’re going to need a lot more of them, and fast. There are only around 12 million licensed hunters in America these days, according to recent survey data from the U.S. Fish and Wildlife Service.

We also need a PR machine to keep the public informed about the hard and heroic work hunters are doing to help contain this crisis — and defend America’s woods, backwaters, farms, and backyard gardens against this horde of destructive, dangerous invaders…

Because responsible, managed hunting is a good thing.

And it should be celebrated, promoted, and preserved for the great American outdoor recreational activity and conservation tool that it is. 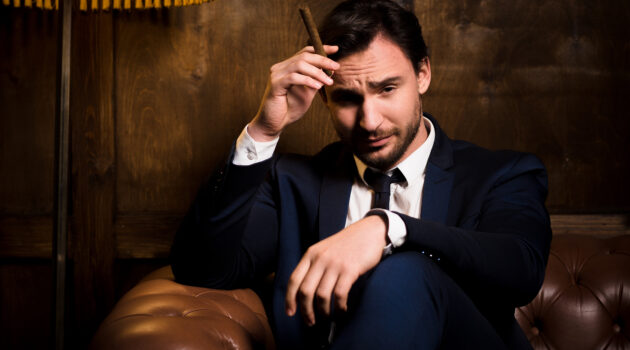 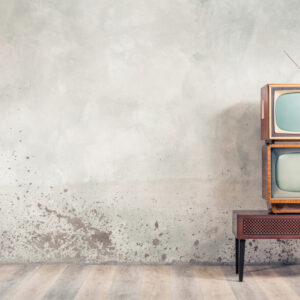 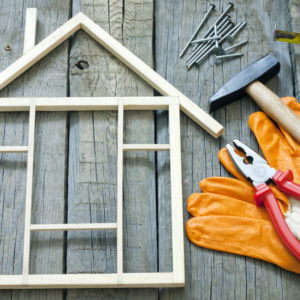 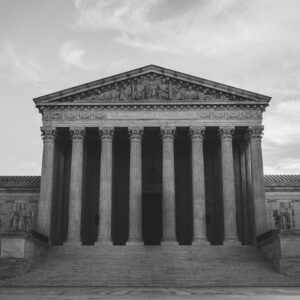 Amidst National Chaos, Biden and the Left Want to Pack the Supreme Court 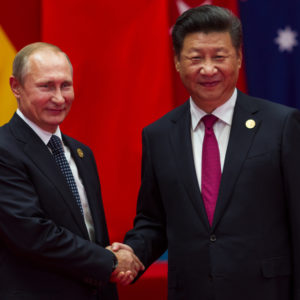 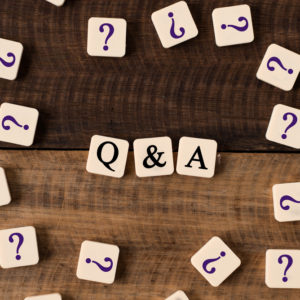 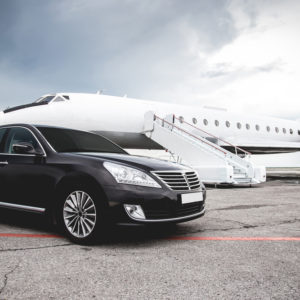