That’s the total value of the company’s outstanding shares of stock — not quite 10% of U.S. gross domestic product.

It’s a major milestone. Apple is now the most valuable company in U.S. history…

But it might also be the riskiest play in the U.S. stock market just now.

So if you’re thinking about jumping on the Apple bandwagon now… or are currently counting the gains on your Apple stock shares — pay attention!

And please consider Apple’s precarious position even if you’re not holding its shares… or don’t care much about stocks at all, for that matter.

That’s because what happens next could easily affect everyone… including you!

First, if you bought Apple shares over the past few years, congratulations!

The company’s stock-run has been extraordinary.

Consider that nearly $1 trillion (yes, trillion with a “t”) of Apple’s current $2 trillion market cap showed up in just the past five months. 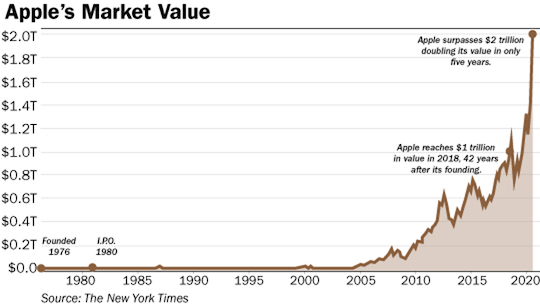 Yet at the same time as Apple shares rose, “the global economy shrank faster than ever before,” according to the New York Times.

You’ve seen the economic calamity in the news, even if the wolf hasn’t shown up at your own  door. Indeed, you can probably witness some of the troubles merely as you drive around town.

Across the country (and the world), millions of businesses have closed. Travel is restricted. Tens of millions of workers have lost jobs. People are losing their houses. Food banks are overwhelmed. Governments are spending themselves broke…

You know the drill.

And through it all, Apple shares went up, up and up some more.

There’s a school of thought that Apple has become “the new flight to safety,” according to professor Aswath Damodaran of New York University, quoted in the New York Times.

This perspective is part of a money-management trend… Or perhaps it’s a fad.

“This crisis has strengthened what was already a strong hand,” said professor Damodaran.

In other words, due to the pandemic and widespread lockdowns, entire populations are restricted to limited areas at home, work, school, etc.

This is how a shut-in world manages to connect, get work done, find entertainment and generally remain part the wider society.

All of which naturally benefits big tech.

Meanwhile, it’s a universal truth that investors seek some semblance of safety for their dollars. So individuals, funds, institutions, pensions, etc. have poured billions into these tech plays.

The basic thesis is that the tech companies’ size and market dominance will create a safe (or at least safer) haven during the recession caused by the pandemic, and the follow-on, national-scale lockdowns.

Then again, it’s also worth noting that we may not be in a simple, old-fashioned “recession” so much as we’ve waltzed into a new depression, as I’ve discussed before.

In fact, my colleague Jim Rickards foresees many years of economic underperformance across the U.S. and global economies.

So why does Wall Street think Apple is worth $2 trillion?

First, don’t be fooled by the huge number.

Yes, as far as Wall Street is concerned, Apple is worth $2 trillion.

But even if you had that much cash burning a hole in your pocket, you couldn’t just fly out to Cupertino, California, plunk it all down in front of Apple CEO Tim Cook and buy the company.

It just doesn’t work that way…

Still, it’s helpful to consider what that $2 trillion does represent. Apple generates $260 billion in annual sales (just under an 8x factor), as well as yearly profits in the range of $50 billion.

That gives the company a price/earnings (p/e) number of 40, which is completely out of whack.

Commonly, one would associate a p/e of 40 with a go-go, fast-growing company, not a big, established behemoth. That is, it’s not as if Apple can double sales or profits at this scale, right? How many more iPhones and iPads can Apple sell? At what price and markup?

Here’s a revealing way to illustrate the situation.

In the 22 weeks since mid-March, Apple’s valuation has risen by an average of about $6.8 billion per day, according to S&P Analytics. That’s more than the value of, say American Airlines. Every day…

Does that make sense?

Plus, as I mentioned, Apple shares have soared despite evident and likely long-lasting economic and social troubles across the landscape. It stands to reason that tens of millions of unemployed people aren’t going to buy expensive new phones, hand-devices, computers, etc.

And there’s something else that seems odd about Apple’s rapid ascent to the $2 trillion level.

The company has not recently introduced any standout new devices or products.

Most wares on Apple shelves are iterations of earlier products, with perhaps a faster chip coming along, or a different design to the outside shell.

Yet many investors obviously view Apple as an effective, reliable moneymaking machine.

Apple products are ubiquitous, not just in the U.S. but across the world. And apparently that was enough to get the shares to $2 trillion…

So right now, for a moment in time, Apple may be in a sweet spot.

It can harvest strong profits based on its high-end pedigree. Meanwhile, the company sidesteps the need to come up with near-term, groundbreaking products that will power the company forward over the medium and long haul.

Most things that spike upwards in a rocket-like ascent tend to come back down. And that return to earth can resemble a crash.

I know, I know…  “This Is Apple!” goes the refrain… “And Apple is special. It’s different.”

Just like how, back in the 1920s, people bid up shares in the old Radio Corporation of America (RCA). “No price is too high to pay for RCA,” went one memorable phrase…

Until 1929, when RCA crashed with the rest of the market.

In fact, RCA’s eventual plummet helped take down the rest of the market.

Flash forward to today, and the stock market seems very much set up for a tech crash…

The reasons are hiding in plain sight.

First, at its current valuation, Apple is priced for nothing short of economic perfection… The “perfect” company, with its perfect products and perfect sales concept inside its perfect, immaculate white Apple stores across the land.

But many of those Apple stores are inside of now-closed shopping malls. Time will tell how much and how fast the foot traffic returns to those handsome, sturdy sales tables.

Meanwhile, many potential Apple customers are not in a spending mood. Perhaps they are laid off or working reduced hours. Or their business is closed. Or they see the economic landscape and just don’t want to risk spending a thousand or two dollars on the latest Apple upgrade.

Consider that one large market for Apple products is schools and universities. I won’t dwell on the current disaster in the education complex in this article (stand by for that… it’s coming).

Many elementary/secondary school districts are one step away from being broke. The upcoming fall season is already a hot potato, with schools apparently trending towards dramatically reduced availability and scale.

There are plenty of costly issues on the table, none of which bend towards large-scale purchases of expensive new tech.

All this while colleges and universities are scrambling just to fill slots in the face of large-scale “year off” requests from students who don’t want to risk their time and tuition money on a problematic scheme of online learning at (often as not) full price.

In short, the education bubble is popping, and that’s critical to Apple.

Then consider the manufacturing/sales value chain of Apple.

Indeed, Apple brags about its business model with something that’s printed on the back of many devices: “Designed by Apple in California; Assembled in China.” 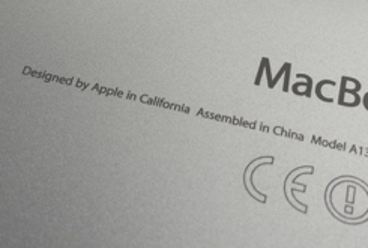 In one respect, this is Apple’s way of presenting itself to customers and the public as a research and development (R&D) powerhouse, employing all those brainiacs in Cupertino.

Or as Agora founder Bill Bonner once quipped about the economic paradigm, “We think, they sweat.”

Arguably, Apple’s statement betrays a critical weakness: That it is, at root, a creature of globalism, which is currently a fast-fading concept.

Start with the fact that Apple is heavily reliant on offshore sources for the products it sells.

Out of Apple’s nine major component suppliers, five are Chinese (Taiwan and Mainland China). One is in Japan and one in South Korea.

Meanwhile, much of Apple’s final product line is assembled in China, and most of that comes from a so-called “Taiwan” firm that operates almost everything in factories sited on the Mainland. It’s called the Hon Hai Precision Industry Co., Ltd., better known as Foxconn.

This China angle alone is problematic, considering the issues that country has not just with the U.S., but with many other nations as well. But that’s another long story.

Eventually, entire planeloads of beautifully packaged, Foxconn-Apple products come via air-freight from staging points in China or Hong Kong to a store near you. Think China-China-China…

Sure, the Apple business model works, and there are plenty of smart people at the company who work every day to make it work.

But at this point in the world situation, with economic and political problems across the planet, is all of this worth $2 trillion?

More to the point, does it make sense that Apple has become $1 trillion more valuable since mid-March?

No, it doesn’t. We are not looking at what we like to call a “de-risked” state of affairs.

As we’ve often noted here, Whiskey & Gunpowder is not an investment newsletter. We don’t run a portfolio.

But at current levels, I don’t see where Apple can go from here…

Meanwhile, there’s gold… which is another discussion entirely. 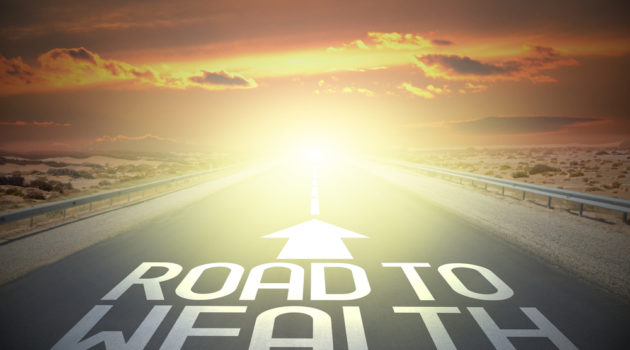 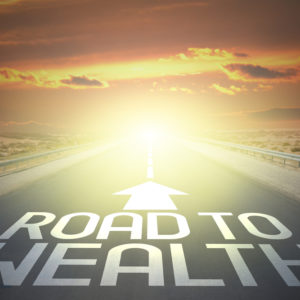