Remember when President Trump sunk Boeing’s stock price… just from this one tweet?

Shares didn’t stay down for long, but it was one of the first times the market saw how something as trivial as a tweet could have a real impact.

These days, people care more than ever about what the president tweets… you never know when you’ll wake up to the market tanking from one of Trump’s late-night Twitter rants.

It’s become such a phenomenon in fact, that just last week, JPMorgan created what it calls the “Volfefe Index” to track and analyze the market-impact of each of his Twitter posts.

For the first time ever, you’ll actually be able to trade President Trump’s crazy tweets!

Because, like in the case with Boeing, the companies he targets almost always recover from their fleeting losses.

You could pocket some quick cash!

Now… are you ready to become a tweet trader?

Buy the Dip… Sell the Rip!

Trump has a knack for grabbing the public’s attention. Who could forget when he posted this about Nordstrom (JWN) in 2017…

JWN slipped about 1% in the minutes following the tweet.

Like Boeing and so many other companies that find themselves under fire from the president, Nordstrom rallied for the remainder of the day.

In fact, when Trump singles out a company, it seems to do better with the increased attention from the market.

That gives you a very limited window — with Nordstrom it was just a few minutes. 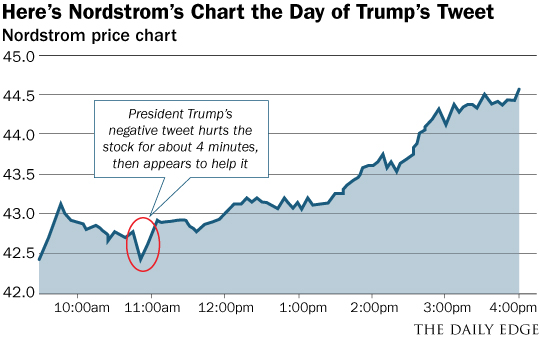 But using the Volfefe Index, you have the chance to get in at a slight discount and capitalize on the price-boost that follows.

And it’s not just individual stocks that have felt the heat from a Trump tweet… only to later recover and climb to new highs.

The President has spent the last month in heated (and very public) trade talks with China, sparking turbulent price action on Wall Street.

On Aug. 23, when he tweeted America would be raising tariffs on Chinese goods, stocks recorded staggering losses and the Dow dropped 600 points in a matter of hours.

But then a few weeks later, the Commander-in-Chief changed his tune and tweeted that he would delay tariffs as a gesture of “good will” to China…

Investors sighed in relief — the Dow closed near its record high and stocks shot up across the board.

The volatility can be jarring. But it also gives you a unique investment opportunity… no matter if you’re a short-term trader or a long-term investor! 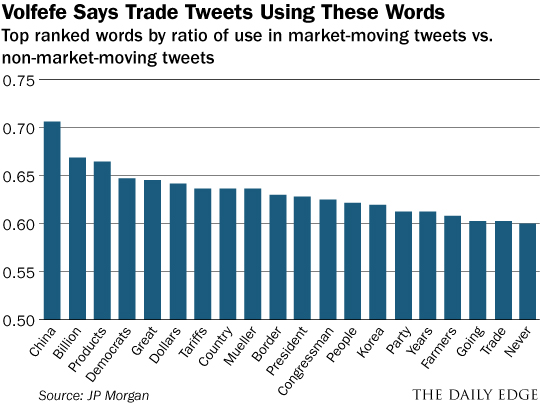 Price, Politics or Both?

It’s always smart to focus on price not politics.

But I must admit, politics do have a way of seeping into the market one way or another.

By combining the two — price AND politics — the Volfefe Index is the best and newest way to navigate this crazy trading environment.

And after looking at the big picture, President Trump’s tweets end up only affecting stock movement for a short amount of time.

Knowing that, you can use those brief drops and pops to your advantage and book quick gains along the way.

Either way, you can get paid from Trump’s wild tweets! 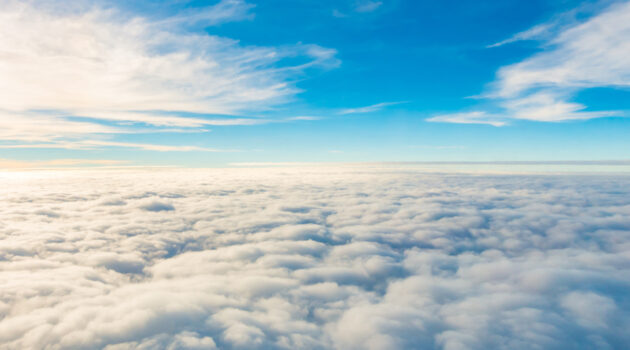 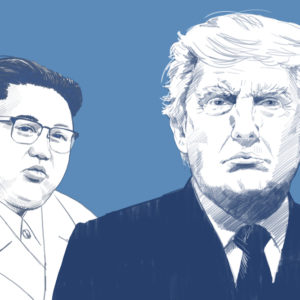 Today, Byron King explains the real reason Trump made an unexpected pitstop at the Korean border. 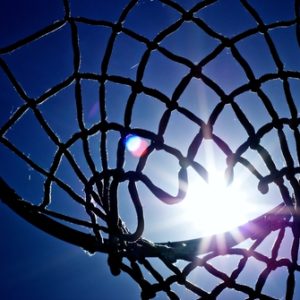 Earlier this month, Janet Yellen and the FOMC raised interest rates. Many Americans who rely on interest payments to cover life expenses are still under severe pressure. Today, Zach Scheidt shows you how to fight back against the war on savers and protect your wealth... 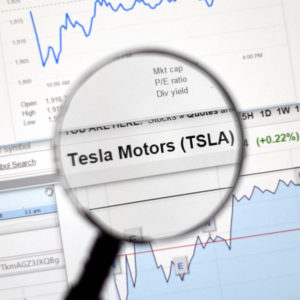 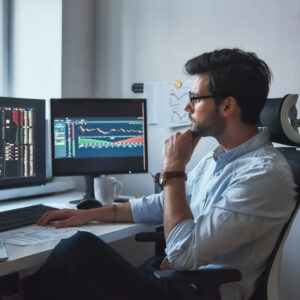 It’s difficult to fight our natural human instincts when market volatility ratchets up. Anxiety over losing hard earned money (and just being plain wrong) increases in the hyper-information media world that blurs the line between manufactured news and disaster. But volatility can also be an opportunity for you to take advantage of big price moves — if you know how to react. 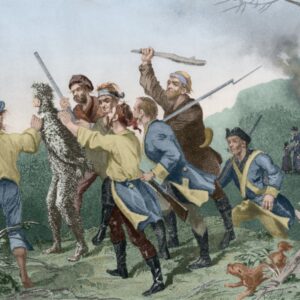 Today, Byron King looks back on history and examines at what point money matters get so bad that citizens feel the need to take up arms.