Welcome to December and the last few weeks of 2015.

Gold wise, it’s been a disappointing year — and that in and of itself is a strange, curious phenomenon, as I’ll address in a moment.

First the facts, though. The price of gold is down about $100 from January 2015 to now. Gold prices are down about $200 over the past two years, since January 2014. The numbers are what they are. We’re on a steady decline curve, as you can see from the (green) 200-day moving average in the price chart. 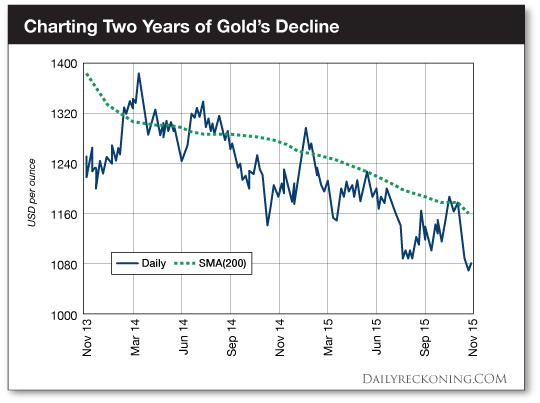 There’s an old saying that nobody rings a bell at the top of a market. It’s equally true that nobody bangs a drum at the bottom either. Is it time for a turnaround? Or should we anticipate more of the same, moving ahead? Let’s review the “negative” case for gold, which is what we see playing out in the chart.

For example, here are several standard reasons why many people warn against holding gold:

1. Strong dollar. We certainly have a strong U.S. dollar now, for many reasons — monetary, fiscal, macroeconomic, geopolitical. The point is that as the dollar strengthens, it’s harder and harder for overseas buyers to justify buying and accumulating gold. That is, as our dollar increases in value, foreign currencies weaken by comparison, so it takes more foreign currency to buy dollar-denominated gold.

2. U.S. Interest Rates. Even after yesterday’s interest rate decision, there are still a lot of questions in the air which leaves 2016 expectations a mystery for analysts.  Higher interest rates are theoretically bad for gold, because as gold critics like to note, “gold pays no interest.” (As if 0.25% interest, one way or the other, should control the environment for gold investment, too — very strange)

3. Gold Mining Companies. Oh, my… where to begin? The enemy of higher gold prices may well be gold mining companies. Miners large and small are burdened with debt and must continue to mine and sell output just to keep up cash flow. Many miners are actually “high-grading” their mines in a time of low prices — meaning they mine the richest sections of ore, simply because that’s what pays. They bypass lower grades of ore, which in the future may never get mined. Thus does ongoing mine supply depress prices.

4. Fund Redemptions. We’re well into a long-term period of sell-down by major funds such as the SPDR Gold Trust (GLD: NYSE). Indeed, just this one particular source sold down about $7 billion worth of gold assets in a recent month. This exerts a strong negative force on gold trends.

5. “Central Banks Hate Gold” Thinking. That is, we have many and varied conspiracy theories along the lines that Western central banks want to keep the price of gold relatively low, because rising gold prices showcase the economic mismanagement of economies by the political and banking classes.

Each of the aforementioned “negatives” for gold makes a point. Indeed, it’s easy to absorb the point, nod your head and think, Yep, that’s right. Yet each negative argument also forms the basis of a story for why the decline in gold prices ought to turn around.

For example, I’ve seen reports from large miners to the effect that a number of older, legacy mines are due to close due to high costs and low productivity. This is particularly the case in South Africa, which is home to many deep, expensive old mines. It’s also the case across the ocean in South America, where copper mines are closing in Chile, meaning that significant streams of gold and silver — byproducts of copper mining — are vanishing from the supply chain.

When mines close, by definition, we’ll see less gold in the marketplace. Prices ought to tighten on that alone. Long story; not just now.

Then we have funds like GLD selling physical gold holdings. OK, so they sell… and then what? Does someone take the gold bars out to the deepest part of the ocean and toss them overboard? Nope.

In fact, much of the gold sold by funds like GLD flows out of London or Switzerland, and thence straight to China, India, the Middle East and even (for all its other troubles) Russia. This makes for many long stories; again, not here. The point is that when Western funds sell physical gold, the metal goes somewhere. The actual geography and logistics are that the gold goes “away” from the West, where the high-level political and economic consensus doesn’t appreciate it. Gold moves to vaults in the East. It’s that simple.

Another way of saying this is that history shows gold moves to where it’s valued. Eventually, all this weight of physical gold will create a new international monetary dynamic. Eventually, perhaps; not just now. But when the dam breaks? Well… think about that analogy. Dams don’t break slowly, right? When dams break, they break fast and you tend to know it.

I could go on and argue with all of the above-noted points about what’s “wrong” with gold. Instead, I’ll mention that not long ago, a savvy acquaintance of mine made an excellent point that covers the bases.

Then this fellow asked the next logical question, “How can this ever end well?” Meaning how can all this debt ever get repaid? The basic answer is that it can’t get repaid. It’s unpayable.

Think about that. The U.S. carries $18 trillion of debt against annual GDP of $18 trillion. If the country worked for “free” for over a year, it might be possible to pay off the debt, in theory. But can any country work for “free”? It’s not going to happen.

Another way to say it is that U.S. debt is certainly “unpayable” by means of the current systems of currency and exchange. There’s not enough productivity in the world for governments — U.S. or any other — to tax and repay all the debt. There are not enough dollars (or euros, yen, pounds, etc.) in the world to wallpaper over this debt, absent massive inflation or an earth-shaking default.

At some point, we’re going to hear senior political and monetary figures say, “We can’t pay that. There’s not enough money.”

Thus, the current monetary system cannot end well. Which brings us to gold and silver, metals positioned to retain wealth over the long haul — during the “transition,” when it arrives, as it surely must.

What then? Well, that’s when precious metals become the “transition elements” — in a nonchemical sort of way (meaning that I don’t want to get into the quantum chemistry of what it means to electron orbitals to be a “transition” element).

Bottom line is that precious metals will help the world transition in phase from a previous, failing/failed monetary and currency system into something new, something that works.

That’s all for now. Have a great week, and be sure to get your Christmas shopping done ahead of time! 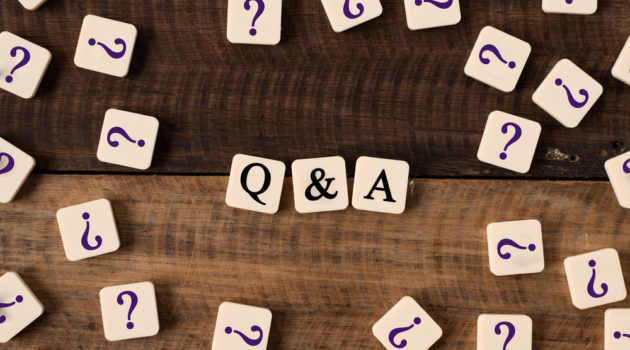 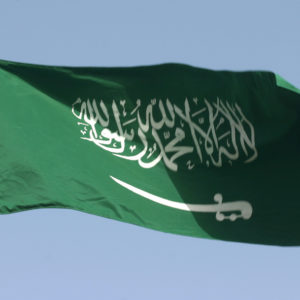 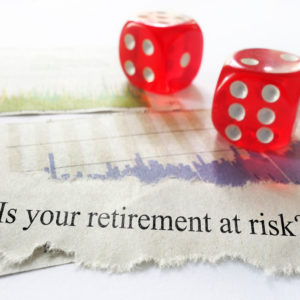