The busy summer travel season is at our doorstep and with that comes stronger fuel demand.

Back in March I shared the fact that Americans drove a record 3.05 trillion miles on U.S. highways in January 2015 for the 12-month period, with even more expected this year. Now the International Air Transport Association (IATA) revealed that international passenger traffic in March rose 7 percent from the same time a year ago. Except for Africa, every region around the globe recorded year-over-year increases in air traffic.

Last week, West Texas Intermediate (WTI) crude oil prices reached a 2015 high, rising above $60 before cooling to just below that. It marked the eighth straight week of gains.

Investment banking advisory firm Evercore makes the case that the recent oil recovery is closely following the average trajectory of six previous cycles between 1986 and 2009. Although no one can predict the future with full certainty, this is indeed constructive for prices as well as the industry. 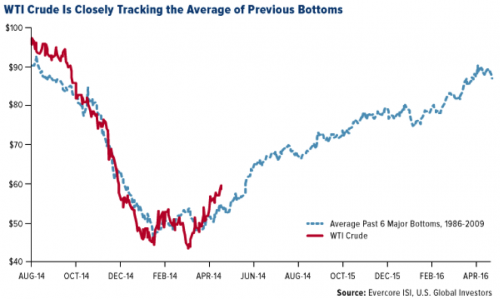 Because oil remains in oversupply, the recent rally owes a lot to currency moves. The U.S. dollar, which has weighed heavily on commodities for around nine months, declined to its lowest point since mid-January. We might be seeing a dollar reset, which should finally give oil–not to mention gold, copper and other important commodities–much-needed breathing room.

The oil rig count continued to drop in April and is now at a five-year low. According to Baker Hughes, 976 rigs were still operating at the end of the month, down 11 percent from 1,100 in March and 47 percent from 1,835 in April 2014. Eleven closed last week alone. This spectacular plunge has had the obvious effect of curbing output and helping oil begin its recovery from a low of $44 per barrel in January. Production appears to have peaked in mid-March at 9.42 million barrels per day and is now showing signs of rolling over.

As I’ve mentioned before, price reversals have historically occurred between six and nine months following a drop in the rig count. The number of rigs operating peaked in October and oil started to bottom in January.

Even though domestic oil inventories still stand at near-record levels–according to the Department of Energy’s weekly report, they’re at their highest level for this time of year in at least 80 years–the rate at which storage facilities are being filled is beginning to slow.

For the first time since November 2014, stockpiles declined at Cushing, Oklahoma, the nation’s largest storage facility and the pricing point for WTI. 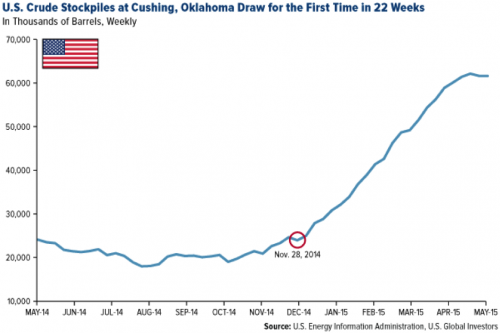 China Continues to Stimulate Its Economy with Weak PMI Trend

Like oil, select industrial metals are making a welcome resurgence. Both zinc and copper have risen above their 50-day moving averages, with copper staging its strongest rally in about a decade. 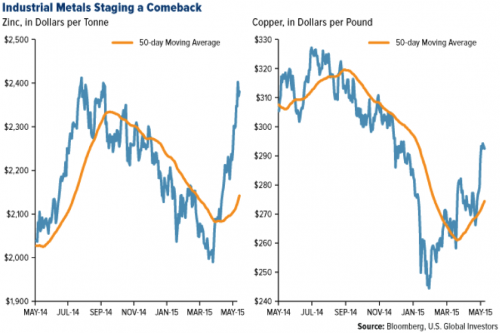 Besides the dollar depreciation, much of this growth derives from the hope that manufacturing in China, the world’s biggest purchaser of copper, is set to pick up. The HSBC China Manufacturing PMI fell for the second consecutive month in April to 48.9, which indicates contraction in the manufacturing sector. But global investors and commodity traders are optimistic that China’s central bank will launch a fresh round of fiscal stimulus to spur purchasing and manufacturing. I’ve observed in the past that the Asian country is quick to respond to economic indicators such as the purchasing managers’ index.

Because of its ubiquity in building construction, electronic products and transportation equipment, copper is a useful barometer of economic growth.

Several mining companies that have exposure to the red metal are performing well year-to-date. Colorado-based Newmont Mining Corporation is up 38 percent for the year; Australia-based Northern Star Resources, 40 percent. We own both names in our Gold and Precious Metals Fund (USERX) and World Precious Minerals Fund (UNWPX).

Last Friday, Syngenta, the giant Swiss producer of not only seeds but also herbicides and insecticides, formally turned down a $45 billion takeover by rival Monsanto. As I’ve discussed before, such offers and deals have typically made the stock of the company being considered for purchase more attractive. 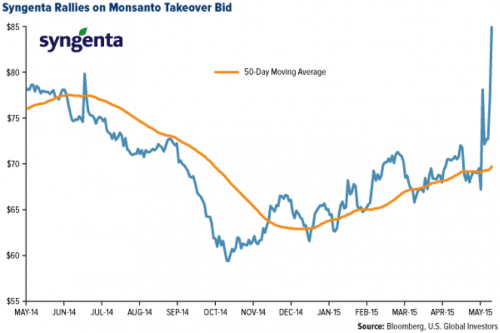 We own both Syngenta, up 33 percent year-to-date, and Monsanto in our Global Resources Fund (PSPFX).

Ramped-up M&A activity has also in the past suggested that a bottom has been or will soon be reached. We saw this in the oil industry, with Halliburton acquiring Baker Hughes last November and Royal Dutch Shell taking over rival BG Group in April.

As Yogi Berra quipped: It’s déjà vu all over again.