There’s a shocking statistic you need to know about U.S. oil and the outlook for 2015.

Today, I’m going to lay it out on the table — with a full case study.

Fact is, one U.S. producer may have just let the cat out of the bag during their 2015 guidance announcement.

If you’re invested in oil now or plan to invest in 2015, this is a story you MUST know.

That said, let’s get our bearings…

Six months ago, oil was near $100 per barrel and the extremist group ISIS was making headlines in the key oil-producing nation of Iraq.

The following 40% (and counting) decline in the price of oil has, therefore, been more than a bit of a surprise to most of us.

The price of oil had already experienced a dramatic drop prior to the OPEC meeting in late November. When the Saudi-led cartel announced that it would not cut production to support prices, the bottom completely fell out.

Since that meeting, various OPEC officials led by the Saudi oil minister Ali al-Naimi have further indicated that we also shouldn’t expect any OPEC action anytime soon. The core OPEC group of financially strong countries (Saudi Arabia, United Arab Emirates, Kuwait) all seem willing to let the oil market sort out the correct price for itself.

I don’t know how low the price of oil will ultimately go in the near future, but I do know that the seeds for an oil price recovery are already being planted by North American shale producers.

These companies are dramatically slashing their capital spending plans for 2015, and I believe that the impact on production will surprise the markets.

The reason shale producers are cutting is twofold.

First, with oil prices down 40% and the debt markets for oil producers in disarray, they simply don’t have the cash to spend on drilling.

Second, at current oil prices, drilling shale oil wells does not make economic sense. The number of drilling locations these companies have is not infinite, and therefore, the rational decision is to wait until oil prices recover to drill wells.

Today, I want to share a contrarian prediction with you.

I believe that the key to understanding the 2015 oil market can be found in the 2015 guidance just released by Oasis Petroleum (OAS). Oasis is a pure play on shale oil production, focused entirely on the North Dakota Bakken formation.

Oasis is a poster child for the entire U.S. shale boom. By looking at what is going to happen at Oasis, I think we can get a pretty good idea of where U.S. shale production is going to go in 2015.

The Key to Understanding Shale — Hidden in the Numbers… 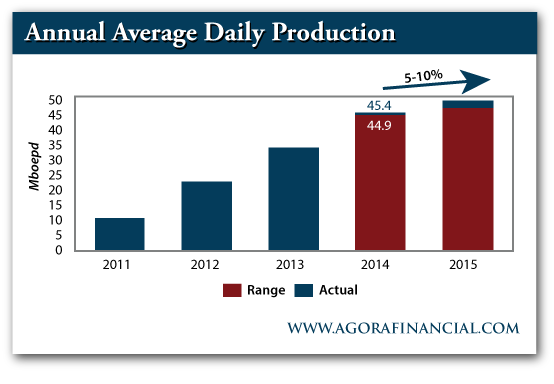 The stock price for Oasis soared on that production growth, from $15 in 2010 to $56 this summer. The recent free fall in oil prices has caused those same shares to drop 80%, to $12 currently.

Despite having four times as much production, Oasis now has a lower share price than it did four years ago.

Last week, Oasis announced its 2015 capital spending plan and guidance. The decrease in spending year on year was eye-popping.

That is a big drop, but a quick look behind the curtain shows a HUGE story unfolding…

You see, if the year-on-year 5% growth is accurate (which I believe it to be), that means by the end of 2015, Oasis’s production will have dropped significantly.

It’s all in the numbers. Let me explain.

Let’s start by looking at the company’s current production. Here’s a look at 2014:

What we need to focus on, then, is the quarter-by-quarter production in 2015 that will be required to get to that 47,381 boe/day average.

To get to those numbers, we’ve first got to follow the rigs.

The Oasis capital plan shows that the company will continue running 10 rigs through January 2015 and then drop to six rigs by the end of March 2015. Since companies have contracts with the service providers that can’t be terminated without proper notice, that explains why the rig count hasn’t already dropped.

And if the rig count won’t drop until March, that means Oasis will likely keep growing oil production into the second quarter of 2015.

We know that Oasis is going to start 2015 at over 48,000 boe/day. Production is going to go up from there until the impact of the rig count cut from 10 to six is felt. That doesn’t happen until March.

Because of the delay between drilling being finished and actual production, I believe that would be a couple of months after the actual number of rigs declines.

I suspect that Q1 and Q2 production for 2015 would look something like this:

The 5% increase in production that Oasis is guiding for is accurate, but the production for the year is going to be front-end loaded. Once Oasis drops its rig count in March, there won’t be enough wells being drilled to offset the high natural shale decline rate.

This is HUGE. Simply put, this shocking statistic means we could very well see a peak in production during the end of Q2 in 2015. As the year goes on, existing production will decline faster than new production comes online.

Plus, if I’m right and Oasis is a minature version of U.S. shale production, then we’ll soon see a similar trend across the industry.

The Whole Shale Industry About to Hit the Reset Button

By the end of 2015, Oasis will have (according to my rough estimates) a level of production that has dropped back to where the company was producing in the second half of 2014.

If the entire domestic shale industry follows Oasis’ lead and starts declining in the second half of the year down to mid-2014 levels, we would be looking at about 8.4 million barrels per day, which is 700,000 barrels lower than where we are currently.

That is a HUGE, unexpected difference, and the impact to the oil markets would be greater than that decline alone would suggest.

The reason for that is that all forward projections of the oil markets for 2015 (from the IEA, OPEC, the EIA) are showing North American production growth of 1-1.5 million barrels per day.

If U.S. production were to drop by 700,000 barrels per day, instead of growing, the oil market would have almost 2 million barrels per day less supply than is currently expected by most market participants.

Flat year-on-year U.S. oil production will cause a big rebound in oil prices. If U.S. production declined, the move would be even larger.

My point to all of this isn’t to suggest that my numbers are right. My point is to show that the shale producers are responding immediately and in a big way to this oil price decline.

With current oil prices, drilling shale wells, which produce 30% of the oil they will ever produce in the first year, doesn’t make a lick of sense.

And if there is one indisputable fact about shale production, it’s that with its very high rate of production decline, a decrease in drilling will quickly show up in the production numbers.

The seeds for an oil price recovery have been planted. Stay tuned. 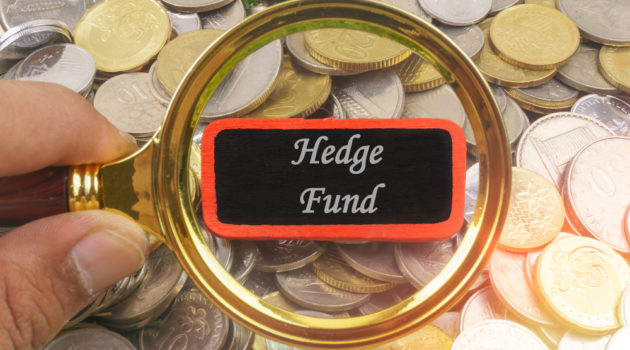 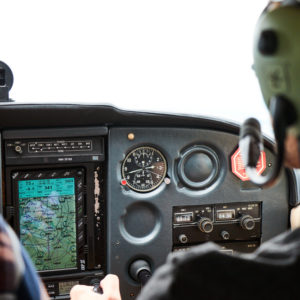 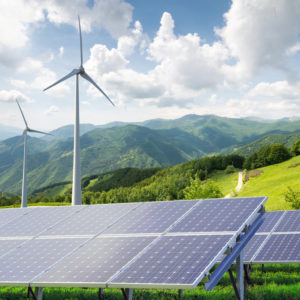