In case you haven’t noticed, there is a crisis brewing in the emerging markets.

The current crisis reminds me, in a way, of how the 2008 financial crisis got its start. It begins with what seems like a brush fire. But in the months that follow, it spreads quickly and becomes an inferno.

The question is: What are the odds that we just saw the tip-off of the next global financial crisis?

If you remember, the 2008 crisis took some time to get going.

One of the earliest signs of trouble was the failure of New Century Financial in April of 2007. It was a leading subprime mortgage lender. In July, Bear Sterns liquidated two hedge funds that invested heavily in subprime mortgages. In August, there was another bankruptcy: The American Home Mortgage Investment Corp. This was a big one. It was the tenth largest mortgage lender in the country.

But think about that timeline… At that point, we were months into the worst crisis since the Great Depression. Warning signs were everywhere. The biggest events and failures were just around the corner. Yet, the market would make an all-time high in October 2007. It would then get cut in half.

Point being, markets can be slow to appreciate that the game is up.

In this case the problems stem from emerging markets. The list of countries with suddenly worrisome problems is long and growing. As creditors and investors worry (sell stuff) the currencies of these countries plunge.

First, you should know that the emerging market currencies in the news have been struggling for some time: 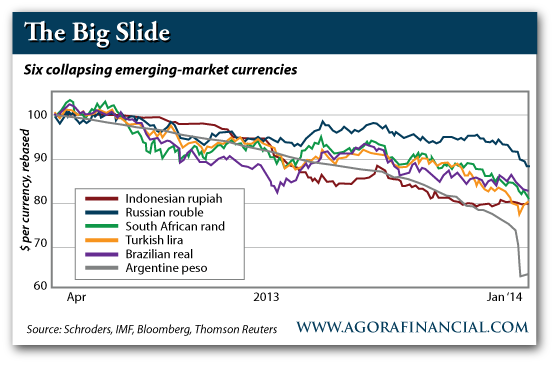 The pace of the declines has certainly picked up though.

I’m not going to get into the details of these countries. And not all emerging markets are in such troubles. But there is a common element among many of them that are: They run big current account deficits. Meaning, they depend on foreign capital. When the foreigners decide they want their money back, you have charts like the above as the selling ensues.

James Mackintosh of the FT put together a nice chart that shows common element clearly. He writes:

“I’ve averaged the currencies of the ‘fragile five’ of Turkey, Brazil, India, South Africa and Indonesia, plus Chile, major emerging markets with current account deficits. Against that [on the chart below] are the five major EM currencies with current account surpluses: China, Malaysia, the Philippines, South Korea and Taiwan. I added in light blue the EM surplus countries without China, just to show the stability isn’t all about the management of the renminbi.”

And here are the results: 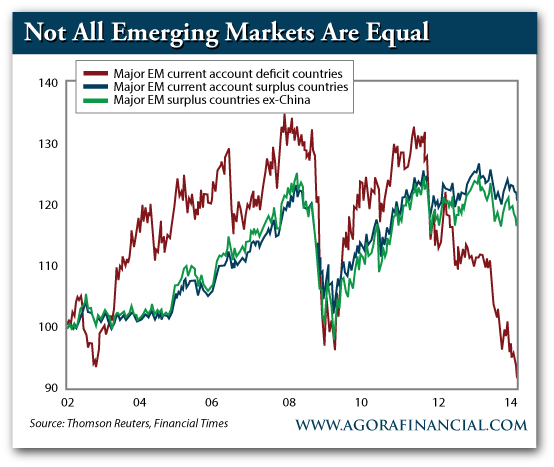 So, all emerging markets are not equal.

As to whether an emerging markets crisis is a trigger for a wider global crisis, it is hard to know. The financial markets are bound up with each other in all kinds of ways. Who knows who is holding, for example, Turkish paper or who isn’t?

All I know is that the U.S. stock market is due for a comedown. It’s had an extraordinary run. In the last six months, there have been only eight days where the market dropped more than 1%. (as of January 31st.) That’s the longest such stretch since June 2007, only four months from the peak in October. That nugget is from Jean-Yves Dumont at Evergreen. We haven’t had a 10% drop in more than two and half years. We could spend all day with stats like these.

With emerging markets struggling and currencies imploding, it ought to take some bite out of the earnings U.S. companies earn abroad. And, whether it is another 2008 or something much less dramatic, stocks ought to come down.

Right now I aim to keep my Capital & Crisis readers’ exposure to these problems virtually nil. But stocks are stocks and they can get caught in the whirlwinds no matter what. Safe to say, the stocks I watch rest on sure foundations and they ought to come out the other side just fine. Market willing, we’ll have a shot at picking up another quality stock or two.

P.S. What kind of companies can weather the storm? That’s a question I’ve tried to answer with my “coffee can portfolio.” And in yesterday’s issue of the Daily Resource Hunter, I gave readers a unique chance to learn more about it. If you’re not currently receiving the FREE Daily Resource Hunter email edition, not to worry. You can sign up, right here. Again, it is completely free to get started, and it comes with no obligation. So you’ve got nothing to lose, but a lot to gain. Click here now to sign up for FREE. 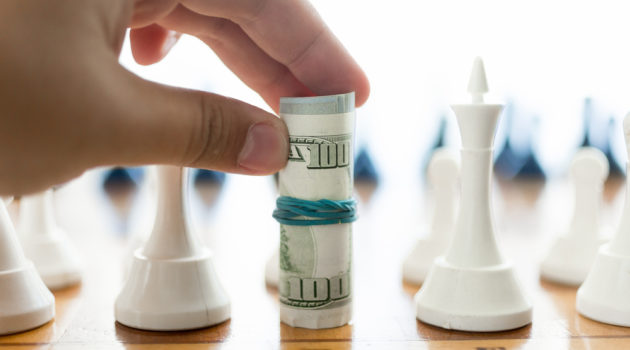 Gold should still be a part of your investment philosophy. Today there’s reason to believe it's due for a turnaround. 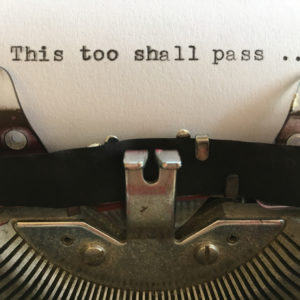 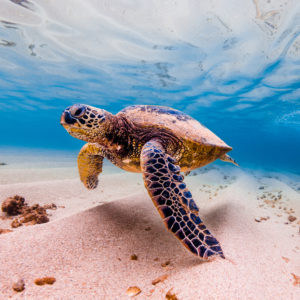