Want to know an asset class that’s almost a surefire winner for the next five years? It’s razor blades.

We’re deadly serious. Figure out how many blades you go through in a year, then go to Costco or Sam’s Club or BJ’s and buy five times that amount. We can nearly guarantee a return on your investment at the end of the first year because by that time the price will be higher. And the returns will only get better as time goes by.

Our modest suggestion is a good starting point for an investing strategy now more than three decades old — long forgotten but still relevant. Turns out it’s easier than ever to implement now in the 21st century…

“Simply stated, invest your savings in those real things that you will be consuming in the future. Save only real wealth.”

We hope we don’t have to convince you that your cost of living is rising and your dollar is shrinking — media prattle notwithstanding.

“Yes, We Have No Inflation,” read a New York Times blog entry in late June, reporting that the “PCE” measure of inflation from the Commerce Department rose 1.1% year over year. (It has since accelerated to 1.2%.) “While some other measures of inflation are rising a little more quickly,” the Gray Lady reported, “the Federal Reserve regards this one as most accurate.”

The story was too much for some readers, who added their comments at the end of the article.

“It astonishes me,” said one, “that The New York Times seems not interested or able to present a balanced, real-life depiction of inflation as experienced by the middle class (do we still exist?) in this time.” Touching naivety, no?

“Yes,” said another, “the mere fact that all the items that the average person buys increase in price every month is of no interest to economists. They rely instead on government statistics.”

Simply reading between the lines of government statistics gives you a more realistic picture. Consider the prices of the proverbial gallon of milk and loaf of bread as reckoned by the Labor Department. 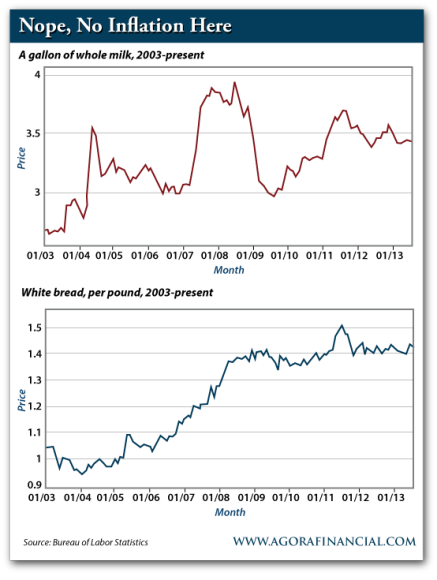 Sure, they’re volatile — which is why government economists claim the prices of food and energy should be excluded from their calculations. But it’s obvious the long-term trend is up.

And while milk and bread don’t have long shelf lives, there’s a host of other goods you buy every month — like razor blades — that can last for years or even indefinitely. Stocking up on those goods is what this forgotten strategy to preserve your purchasing power is all about.

The usual guidance to fight a rising cost of living is to buy precious metals. Which the late John Pugsley thought was a fine idea… but he preferred to attack the problem at the source.

Pugsley was one of the pioneers of the 1970s’ “hard money” movement, publishing a newsletter that urged readers to buy gold as soon as gold once again became legal for Americans to own in 1974.

But by 1980, gold was climbing down from an $800 high that wouldn’t be seen again for 27 years. And Pugsley refined his guidance in a pathbreaking book called The Alpha Strategy: The Ultimate Plan of Financial Self-Defense. Alpha is the first letter of the Greek alphabet, and Pugsley defined the Alpha Strategy as “the first plan for any individual to protect his wealth.”

“Wealth,” he wrote, “is made up of real things. It is hammers, lathes, shovels, typewriters, windows, doors, walls, pencils, shirts, shoes, rugs, apples, automobiles and bread. Wealth comprises all those things we use, enjoy and benefit from.”

He urged readers to rethink the entire process of working for a living and preserving purchasing power: “Instead of converting labor into money, money into investments, investments back into money, and money into real goods once again, convert your surplus earnings directly into real goods. Simply stated, invest your savings in those real things that you will be consuming in the future. Save only real wealth.”

Note well: The Alpha Strategy is not a “prepper” or “survivalist” plan for the end of civilization as we know it. You will not — indeed, should not — load up on No. 10 cans of Mountain House freeze-dried meals.

“While you may choose to put away freeze-dried foods,” Pugsley wrote, “remember that they do not fall within the definition of good savings assets… The Alpha Strategy is a means to protect purchasing power, and is not intended to be a means to defend against social collapse.”

The best part about the Alpha Strategy is you can start with any amount of capital. “If you have only have $100, you can protect it completely against inflation and all investment risks by simply buying things now that you know you will have to buy next week, next month or next year. If you have $1,000 or $10,000, the same thing holds true.”

Better yet, all your “gains” are tax-free.

Addison Wiggin
for The Daily Reckoning

P.S. In a forthcoming essay in the Daily Resource Hunter email edition, we’ll give you a specific playbook on this thesis. In particular we’ll outline the three levels of Pugsley’s Alpha Strategy. It’s your best shot at beating a cost of living increase, whether the government admits there’s one or not! Sign up for the FREE Daily Resource Hunter email edition, right here, to get it before anyone else. 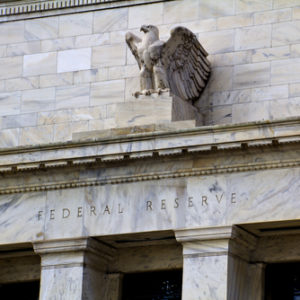 550 Credit Score, A New Mustang, And A Collapsing Economy

The Federal Open Market Committee has been holding its regularly scheduled meeting this week. Today at 2:00, the Fed will release its statement on target interest rates, and Chairman Janet Yellen will follow the statement with a press briefing. CNBC commentators, Wall Street Journal authors, and plenty of other "talking heads" have been telling investors what to expect in this era of "rising interest rates." Well, today Editor Zach Scheidt will tell you why these commentators are dead wrong…

The Profit Potential of Global Warming

Regardless of where you fall on the global warming debate, there's no denying that the world's weather patterns have been fairly erratic recently. But while weather is nearly impossible to predict, there are ways to profit from it. Today, Matt Insley shows you how, no matter where you stand on the climate changed debate. Read on...